LTC Traffic and Transport Group are now at the stage to finalise the proposals for the traffic management in the town as part of the Deed of Obligation and in preparation for submission to SCC Highways for working up the detail with the design consultants. Consideration has been given to the consultation responses from residents and businesses and we would like to detail the revised plans.

This junction has been a concern for some time and councillors have raised the pinch point at our Highways Committee meetings on a number of occasions. To improve performance, it needs to change from a four-way signalised junction to three-way. This is made possible by Main Street/High Street becoming one-way north to south, thus removing a signal as traffic will no longer exit from Main Street (except cycles). The signal can be held on red at Station Road to allow vehicles from Park Hill to turn right into Main Street, thus avoiding any traffic build-up. This is viable and SCC Highways consider it to be an improvement to allow traffic flow and will be taken forward. The timings of the traffic signals will be arranged to take into account the time of day, ie allow longer cycles for when workers are coming and going to work. If SZC is consented, in the early years of construction there will be an additional 500 vehicle movements per day increasing to 950 per day at the height of construction. The solution reflected here would therefore address concerns councillors have raised.

It is now proposed to keep Sizewell Road two-way, so traffic can turn left at the traffic lights off the High Street. This would alleviate all the concerns the Co-op raised with us too. The traffic light in Sizewell Road will be set back to the west of the layby and this will then be a two-way signalised junction. This then enables the widening of the pavements around the crossroads to improve pedestrian safety. Cross Street would be one-way westbound and the traffic signal on that road removed and northbound down the High Street will no longer be possible, hence two-way signals. The benefit of reduced signalling will shorten queuing time and reduce air pollution from traffic waiting at the lights. The footpaths will be reviewed and a crossing to link the Co-op to the CLT plans for the Market Square at a later date. There is currently a 20mph limit in Sizewell Road and further traffic calming measures will be investigated. The layby outside the Post Office delivery centre could be used by businesses as a loading/unloading bay. Motorists will still be able to turn right into Cross Street off Haylings Road to access Central Road and Platters Walk but no further. A bus stop will be located in Cross Street and in Sizewell Road which will be included in the detailed design.

There will be no changes to these residential streets originally proposed for the one-way system. This will be reviewed in the future following implementation of the scheme to determine whether any further actions would be required in the future to support the plans. No changes to car parking will be made in these roads.

Both roads to remain two-way but the Sylvester Road junction with King Georges Avenue requires further investigation to have a better visibility splay and possibly a filter lane for those vehicles turning left. These roads are already used as a ‘rat run’ and traffic calming and safety measures would be addressed as part of the scheme on these roads, especially at the top of Sylvester Road junction with Seaward Avenue with a pedestrian crossing to aid safety for pedestrians, especially those going to and from school. Investigations are still underway by Highways on the Sylvester Road concrete plates. The parking element in Seaward Avenue which the LTC Highways Committee have been pursing will not be included within these proposals, this is something the Town Council will progress separately. Note: LTC are investigating the build out area on the south side of Seaward Avenue which could allow for 3 or 4 parking bays as reported by the Highways Committee.

It is proposed no changes to traffic flow but there will be build-outs included in the design to stop motorists from speeding and to aid pedestrian safety, especially as part of the cycle route strategy. Investigations are underway on the ownership of the track behind the houses, and the possible use (1.5m) of some of the community orchard and sports field as a cycle route as an alternative to using KGA.

It is proposed to include yellow-up lining so no parking anytime on the bend by the Old Police Station and the corner shop, which also restricts vehicles bumping up the kerb. This particular road has always been a concern with traffic flow and yellow lining to stop cars parking on the bend would be a must. It is intended to have a 20mph speed limit in this road to aid safety of motorists and pedestrians.

Five gateways into the town have been proposed, the exact locations to be agreed but the existing plans give a good idea. These proposals were well received and will be taken forward. It encourages motorists to be respectful when entering our town and to drive sensibly and responsibly.

These plans were well received by residents and will be taken forward. However, changes will be made to the design due to the revisions on the roads no longer within the one-way plans to allow cycle safety. There is a national drive to promote health and wellbeing which we all support and aligns perfectly with the East Suffolk Council’s Cycling and Walking Strategy to encourage people to be more active. As a Town Council we have endorsed Net Zero Leiston and the need to encourage everyone to use more sustainable forms of transport and reduce carbon emissions which short journeys in Leiston are a main contributor. Additional cycling parking will form part of our plans to support the cycling network.

Bus operators have trialled using Seaward Avenue/Sylvester Road as a possible bus route and feel this would work well and is feasible if the road surface is suitable, this will be taken forward. Concerns had been raised from residents regarding safety issues with buses travelling along these roads with school children. Therefore, we have asked for the traffic calming measures, ie pedestrian crossing to be included in the detailed plans. Two new bus stops will be located in Sizewell Road and Cross Street, the Cross Street bus stop will replace Main Street when travelling to Saxmundham. The bus operators are being contacted regarding the changes to the plans to ensure the revisions back to two-way in Sylvester Road are suitable for the bus route.

SCC Highways will cover the consultation process on the Road Traffic Orders (RTOs) and the legal requirements as part of their role. 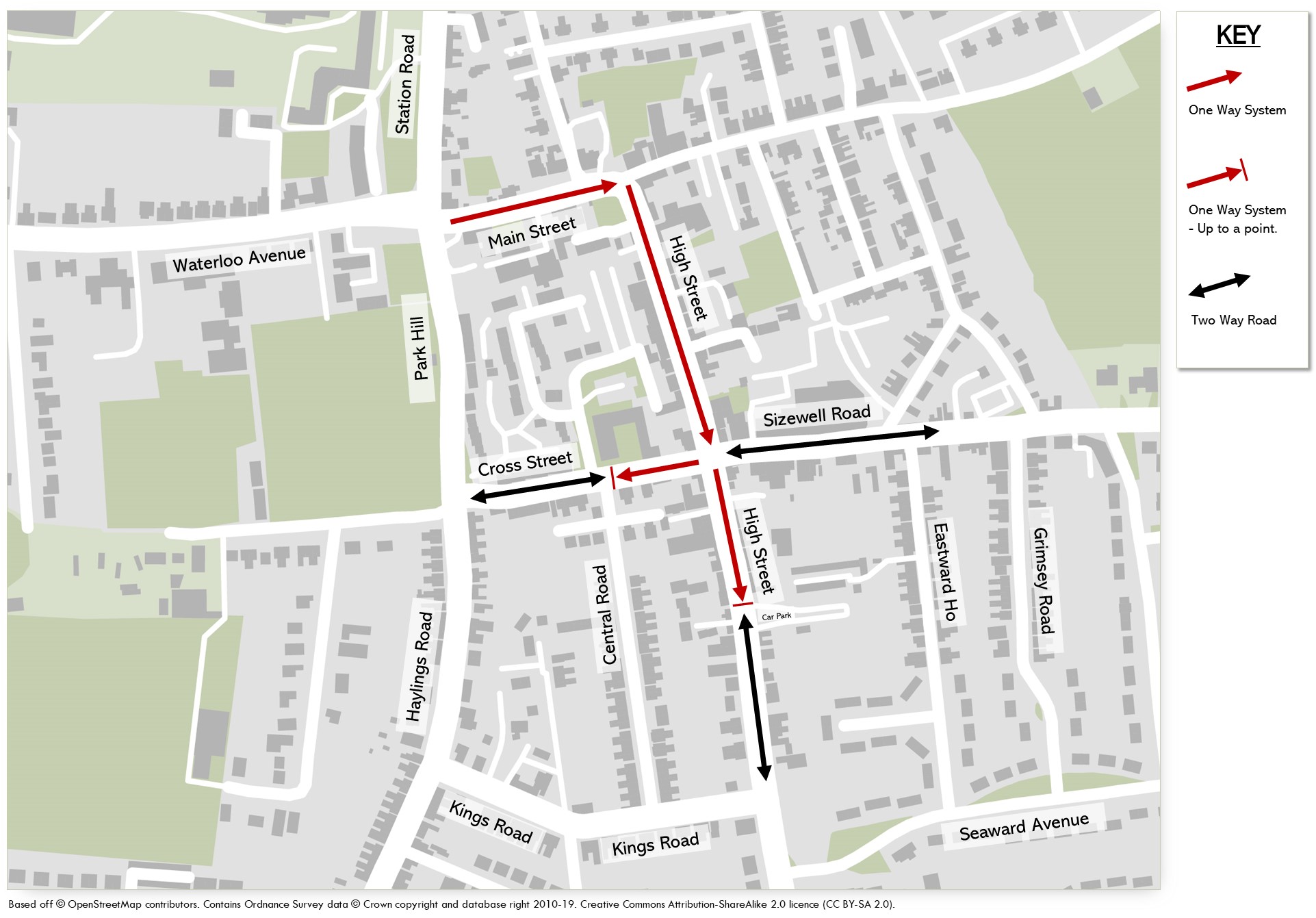